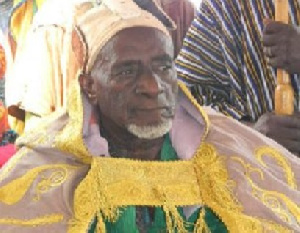 The Paramount Chief of Gonja, the Yagbonwura, Tuntumba Boresa Sulemana Jakpa, has said his area is still a peaceful place for investment despite the lynching of a 90-year-old woman at Kafaba in the East Gonja municipality recently.

“I still want to assure Ghanaians and the entire Gonja kingdom that Gonja still remains a peaceful land and a peaceful place for everybody to invest in and go on with our businesses in success”.

Akua Denteh was lynched after a witchdoctor declared her a witch.

Sherina Mohammed, the sorcerer, has been arrested together with six others.

The overlord has expressed his appreciation to the security services for attaching urgency to the matter.

“I want to say that this barbaric act is not the best that has happened in the Gonja kingdom and I would want to mention that everybody in the kingdom should stand and condemn this act to the fullest.

“Having said this, I want to use this opportunity to congratulate the security agencies in Ghana for working assiduously in making sure the perpetrators are brought to book”, he said.

He also thanked the traditional authorities for making sure that suspects are being brought to book.

The overlord also thanked the chief informant in the matter for collaborating with the security agencies in arresting the perpetrators.