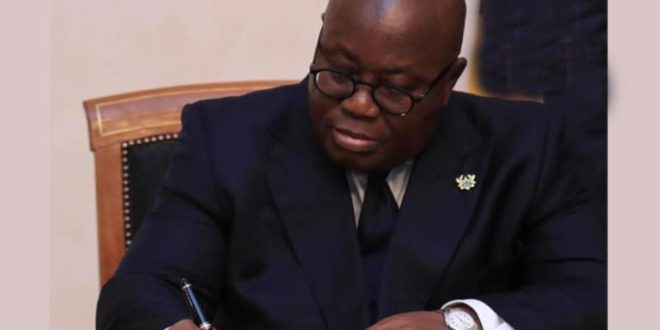 Government cuts salaries of appointees by up to 30% – Presidency

The presidency has confirmed that appointees will take salary cuts as part of measures approved by President Nana Addo Dankwa Akufo-Addo to mitigate hardships in the Ghanaian economy.

Government has recently admitted that the economy is in distress amid the rising cost of living, hike in fuel prices and the depreciating rate of the local currency, the cedi.

The Presidency on Wednesday communicated via its social media handles, four major areas in which the government was seeking to tackle in easing the economic hardship.

One of the four being: “Government cuts salaries of appointees by up to 30%,” a flyer with the image of the president read.

It is yet to be know which categories of appointees will take up to 30% cut and which group will take a lesser percentage cut.

The other three mitigating measures include: “Cabinet agrees border reopening within 2 weeks, policy rate increased substantially to 17%; cost of loans to go up and government to pump US$2bn to rescue cedi.”

These measures were reached after a cabinet retreat last week at which the President and his appointees deliberated on ways to ease the economic strain on citizens.

Finance Minister, Ken Ofori-Atta is expected at a Press Conference scheduled for the Ministry of Information on March 24, 2022; to formally announce key government interventions aimed at dealing with current economic challenges the country is facing.

Members of the Council of State announced on March 23, that they had opted to take a 25% cut in their monthly allowances to help with the economic difficulties.

Nana Otuo Siriboe II, Chairman of the Council thanked the President during the meeting for agreeing to also take a cut but the percentage rate of the cut was not mentioned.