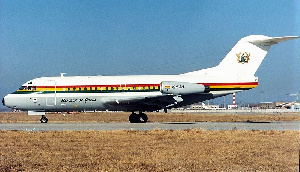 The Minister for Defence Dominic Nitiwul has confirmed government is in the process of acquiring a new Presidential jet.

According to the minister, the move is based on a request by the Ghana Air Force for procurement of a main aircraft for government business.

Answering questions from North Tongu MP Samuel Okudzeto Ablakwa who wanted a confirmation of revelation by Director of Communications at the Presidency Eugene Arhin that government is buying a new jet, Mr. Nitiwul disclosed consultations with Parliament, trade unions and religious bodies are ongoing ahead of the purchase of the new Presidential jet.

In September, Communications Director at the Presidency, Eugene Arhin speaking to Journalists at the Jubilee House revealed that the Interior Minister has already commenced the process to acquire the new jet to save the country from costs.

“You would recollect that when the government of President Kufuor left office in 2008, it had procured two jets – the current Falcon and a bigger one, but for one reason or the other, the bigger jet was cancelled, and we were left with just one.

That has happened, but you will recall that the Defence Minister stated clearly that the government has decided to buy a bigger jet to save us from all these troubles.”