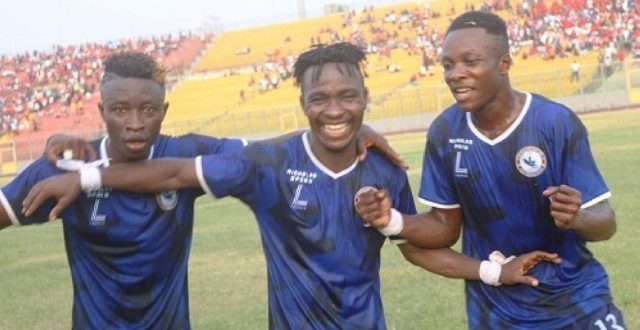 Eleven Wonders got the only goal of the match on the stroke of half time via a penalty by Kwadwo Asamoah.

This victory is the first of the season for the Techiman based side who featured debutant Prince Baffoe, whilst Aduana Stars also lost for the first time this season and lost their 100% record.

In Berekum, Chelsea continued their fine form in the Ghana Premier League when they inflicted a 1-0 defeat over Dreams FC this afternoon.

The only goal of the match was scored by Black Meteors Zakaria Fuseinu in the 15th minute.

Both teams tried to score but the second half could not produce any real goal scoring opportunity as the Berekum based club secured their first win at home and made it 10 points.

Elsewhere, Medeama FC made it three wins out of four matches when they piped Kumasi Asante Kotoko by a goal to nil courtesy a penalty by Opoku Agyemang.

This is the second consecutive defeat by the Porcupine Warriors after losing 0-1 to Chelsea over the weekend in Kumasi.

Medeama made it 10 points and climbed to the league ladder on goal difference, ahead of Chelsea. Their lead will however be dependent on Ashgold Legon Cities FC encounter later this evening.

Accra Hearts of Oak continued their renaissance after a poor start to the season, drawing 0-0 with WAFA at the Sogakope Astro Turf Park.

The Phobains were better and well organized but failed to take advantage of their dominance in the game.

King Faisal however got their first point of the season, drawing 2-2 with Bechem United at the Baba Yara Sports Stadium.