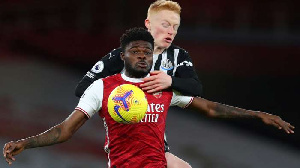 Arsenal midfielder Granit Xhaka has noted that colleague Thomas Partey is being assessed on the amount of money the club paid for him adding that, doing so is blinding his critics from appreciating his contribution to the club.

Granit Xhaka who is Partey’s midfielder partner told The Athletic that Partey’s price tag is weighing on him as his performances are always compared to the money Arsenal paid Atletico Madrid for his signature.

He, however, thinks it is wrong for people to have such notions because players do not dictate how much is paid for their signature.

Xhaka also opened up on how it feels to be playing alongside Partey in the heart of the Arsenal midfield.

The 28-year-old is reported to be pocketing $250,000 weekly as part of his four-year contract with the London side.

Better than Maguire – Fans hail Amartey after performance against Liverpool