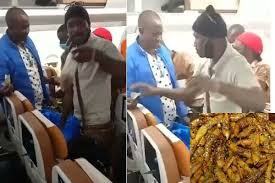 Over the weekend, a video went viral in Uganda in which a vendor of a grasshopper delicacy was seen selling the produce in a Ugandan Airlines flight.

The flight was confirmed as UG 446 heading to Dubai, the United Arab Emirates, UAE on Friday, November 26, 2021.

Mubiru Paul, the 27-year-old vendor issued a statement to the Airline and copied it to the Minister of Transport and Civil Aviation Authority, apologizing for the incident.

“I am sorry… to everyone hurt by the act on board. I recorded the video not to tarnish or ashame the airline, the country or the passengers on board but for comedy purposes, specifically ‘Tiktok’ deeds,” his statement read in part.

After the hawking incident, the Airline says it will include the local delicacy “Nsenene” on its inflight menu on request.

This move will boost tourism marketing and the livelihood of people in the “grasshopper value chain” going forward, the Airline added.

The transport Minister had earlier ordered an investigation into the incident.

Source: www.ghanaweb.com
Related Topics:Grasshopper
Up Next

‘Absolute chaos’ in South Africa as flights grounded over Omicron