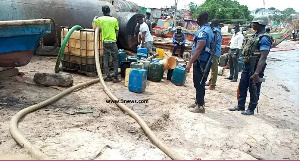 There was a standoff between officers of the Enforcement Unit of the Ghana Maritime Authority and some community members of New Takoradi in the Western Region as the enforcement team attempted to confiscate a ‘dendey’ loaded with adulterated fuel on Monday, March 14.

According to reports, officers of the Unit at the Ghana Maritime Authority at 2:00 am Monday, acting on intelligence, went to the shores of New Takoradi Poase for enforcement.

They met some young men with a ‘dendey’ loaded with adulterated fuel.

A ‘dendeys’ is a wooden boat.

A scuffle ensued as the team attempted to confiscate the product.

In the process, some members of the Enforcement Unit got injured.

Reinforcement was called in to intervene. Sensing danger, the young men perforated the ‘dendey’ causing the fuel to spill. This they did to prevent the officers from taking the product away.

When Connect FM got to the scene, large areas of the sea at the Poase Beach had been heavily polluted by the oil spill.

Officials from the National Petroleum Authority (NPA), National Security, and several other security officers had taken over the shoreline of New Takoradi Poase.

Some men were busily pumping loads of adulterated fuel into a waiting fuel tanker, while scores of curious and helpless residents watch on.

Public Relations Officer of the 2 Garrison Enoch Opata in an interview said the situation has been brought under control.

“They get the fuel from the high seas. We call it illegal bunkering. The fuel ends up here then transported to fuel stations for sale. And as you can see all around this area obviously is notorious for illegal bunkering. All these containers and gallons you see littered around are used for the illegal activity.”

Earlier, 3news.com was informed that there was an exchange of gunfire between the security men and some members of the community suspected to be owners of the adulterated fuel.

Enoch Opata claimed that the gunshots were warning shots to scare the residents away.

“It was not an exchange of fire but warning shots. The community members were threatening so it was shot to scare them away. Currently, everything is under control.”

A reinforcement team has since Monday morning been stationed at the shores of Poase New Takoradi to ensure calm.