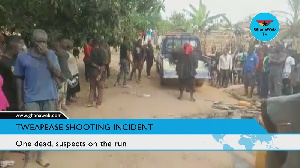 Haphazard shooting leaves one dead at Tweapease, suspects on the run

Haphazard shooting by some irate men at Tweapease, a community in the Kwaebibrem District of Eastern Region, has led to the untimely death of a 45-year-old man called Eric Twumasi.

The gunshot dismantled the head of the deceased causing his brain to ooze out of his skull.

The Asuom Police command is currently on a manhunt for at least seven suspects who are on the run after the death of the 45-year-old Eric Twumasi.

According to the Asuom Police Station situation report, at about 1:15pm on Saturday, March 12, 2022, one Kingsley Gyapong, a member of Tweapease community, called the station on phone and lodged a complaint of seeing the seven bolted suspects wielding pump action guns and locally manufactured pistols and shooting haphazardly in the town.

According to Kingsley Gyapong, those he saw included, Ecolac, Simon, Kofi Emma, Abincolo, Ashaiman and Kwasi Owusu who are all currently on their heels.

The situation report also stated that the same information was confirmed by another Eric Ebu.

The police information however indicated that the person who shot Eric Twumasi, from the suspects, is yet to be identified.

According to the Police, they proceeded to the scene and met the body of Eric Twumasi lying in a pool of blood in a supine position with his brains lying beside him in his veranda.

“The pump-action gun was left in the compound with one used shell of 4 bore AAA Cartridge.

“The body was conveyed to the Kade Government Hospital where it was pronounced dead upon arrival by Dr. Nelson of same hospital.

“The body has since been kept at same hospital mortuary for preservation and autopsy,” the police situation report stated.

No arrest has been made yet.