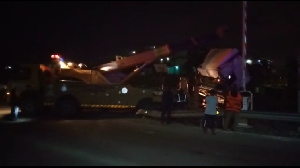 The incident occurred on Saturday morning

A head-on collision by two trains at Wassa Manso in the Western Region has resulted in the death of many passengers on board.

The incident is said to have happened around 2 am on Saturday, December 18, 2021.

According to reports, the two trains were moving from opposite directions on the Tarkwa-Kojokrom route.

Fire Service personnel have arrived at the scene and are on a rescue mission.

According to Graphic Online’s Western Regional Correspondent, the number of causalities can not be immediately ascertained but many people have lost their lives.

Source: www.ghanaweb.com
Related Topics:Heads-onTRAINWASSA
Up Next

Tension in Nyinawusu after the death of five illegal miners