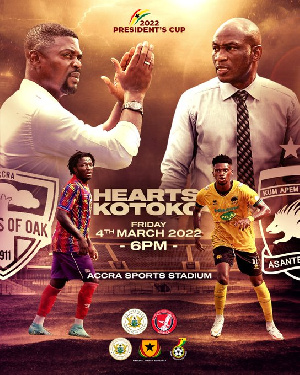 Hearts of Oak, Asante Kotoko to pocket GHC50,000 each as appearance fee for 2022 President’s Cup

Asante Kotoko and Hearts of Oak will pocket GH¢50,000 each as an appearance fee for this year’s President’s Cup match, the Ghana League Clubs Association [GHALCA], who are the organizers have confirmed.

The much-anticipated game has been slated for the Accra Stadium on Friday, March 4.

The two Ghana Premier League sides would share GH¢100,000 and 25 per cent each of the total gate proceeds.

“Football is all about business and at the same time it brings us together, so the two clubs will take an appearance fee of GH¢50,000 each,” Kudjoe Fianoo, chairman of GHALCA said as reported by Graphic Sports.

“GHALCA, as organisers, will take 50 per cent and the two clubs will take 25 per cent each of the remaining 50 per cent,” he added.

The President’s Cup is an annual ceremonial match organised by the GHALCA to honour the sitting President.

Hearts and Kotoko are expected to renew their rivalry for the second time in three weeks, having played out a goalless draw in a seventh week outstanding league match at the Accra Stadium on February 20.

The Phobians will be looking forward to winning their seventh President’s Cup title, after losing the 2019 edition to the Porcupine Warriors who are also seeking their ninth trophy.

Previous Shatta Wale’s mother bursts into tears; says her ‘BP has gone high’ over homelessness
Next Why Dubai could become the trading point of Ghana’s cocoa