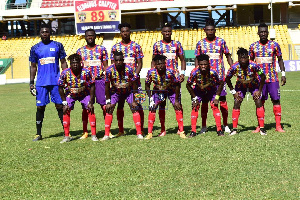 President of the Ghana Football Association [GFA], Kurt Okraku will dominate the Ghana Premier League soon despite having a dwindling campaign.

The Phobians, who are defending champions of the ongoing Ghana Premier League have been poor.

After 24 matches played, the Rainbow club sit 6th on the league log with 36 points.

However, Mr. Okraku believes fixing the fundamentals just like how the club is doing will guarantee them success in the future.

“I think it is not a problem because we saw what Hearts of Oak did last season by dominating all competitions,” he told GTV Sports Plus.

“They have brought in new players and with the Pobiman project ongoing, I believe in fixing the fundamentals and when you get that rights, you are guaranteed success and that is what Hearts of Oak are doing now.

“I am confident they will dominate just like how they did from the 2000s and last season,” he added.

Meanwhile, Hearts of Oak who are the defending champions of the MTN FA Cup are in the semi-finals of the competition after beating Division One League side, Skyy FC by a lone goal at the Accra Sports Stadium in the quarterfinal games.