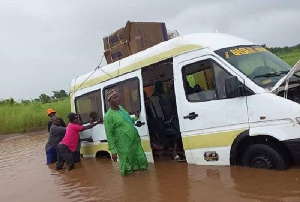 The major road leading from Yendi to Chereponi in the North East and the Northern Regions has been cut off, following heavy rains on Sunday, leaving commuters stranded in the middle of the road.

The road had been submerged in the flood water, leaving commuters with no option than to resort to the use of canoes to cross the road.

Some group of young men also positioned themselves at the flooded portion of the road to help commuter cross at a fee.

Alhaji Usumanu Dawud a traveller in an interview with the Ghanaian Times said, the young men chargs 3.00 Ghana Cedis per person whilst the canoe takes 2.00 cedis before taking them across.

He said the situation had affected their businesses as the water lever of the affected portion was still high.

“That particular portion always floods whenever it rains heavily” he added.

Alhaji Dawud added that the flood had washed away many foodstuffs as well as animals belonging to communities within that area.

He appealed to the government to fix the road immediately as they suffer any time it rained.

Assemblyman for Zogbeli electoral area Mr Sandabi Sandoo said he had received several calls on the incident and he had since made a report to the appropriate authorities.

He said some communities within the Chereponi District had been cut off completely following the perennial rain in the area.

Mr Sandoo however called on the government to come to their aid and find lasting solution to the flood problem in the district.

Previous Every bullet, bomb that hits a target in Ukraine hits our pockets – Akufo-Addo tells UN
Next Black Sherif’s ‘Soja’: Here are the lyrics of the song