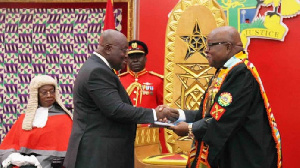 When the Agbogbomefia of the Asogli State, Togbe Afede XIV, made public the details of his ex-gratia and the reasons he decided to return the GH¢365,392.67 paid him as ex-gratia for his role as a member of the Council of State between 2017 and 2020, it gave Ghanaians a fair idea of exactly how much is paid to such beneficiaries.

In a new list made available by Joy 99.7 FM on Twitter and sighted by GhanaWeb, it lists out the amounts paid to all the other Article 71 officeholders in the country.

For clarity, aside from the president and his vice, the rest of the Article 71 officeholders are Members of Parliament (MPs), political appointees, and public servants with salaries charged to the Consolidated Fund but enjoying special constitutional privileges.

The list below details who got what as ex-gratia for serving within the period of 2017-2020:

Previous Owo Catholic Church massacre was message to South-West and we’ve got it – Soyinka
Next Sir John’s Will: Special Prosecutor intimidating me – Charles Owusu