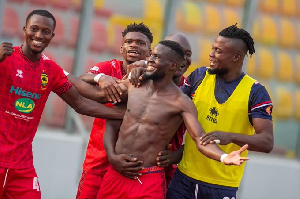 Asante Kotoko maintained their hold on the summit of the Ghana Premier League after cruising to a resounding 5-0 victory against Bibiani Gold Stars on Sunday, March 13, 2022.

The Porcupine Warriors had failed to score in midweek against Bechem United but found the net twice before the 35th-minute mark against Gold Stars.

Both goals were scored by Cameroonian Mfegue Omgba in the space of three minutes.

He broke the deadlock in the 31st minute when he reacted quickest to tuck the ball into the net after Gold Stars goalkeeper Ernest Kusi fluffed a cross.

It became two moments later as Omgba lifted the ball over the goalkeeper after being teed up by compatriot Mbella Etouga.

The goals did not stop as Kotoko grabbed a third in the 59th minute. Augustine Agyapong netted his debut goal after his long-range effort took a wicked deflection.

Mbella scored his 14th of the season from the penalty spot before Samuel Boateng wrapped up the scoring four minutes from time.

The win is Kotoko’s biggest of the season as they remain in total control of the title race. They lead second-placed Aduana by eight points with 14 games to go.

Kotoko have a 15 point lead over reigning champions Hearts of Oak who are struggling to get into the top four.

Bibiani Gold Stars will be extremely disappointed but the scoreline is not a surprise given that they are one of three clubs who haven’t won away from home.