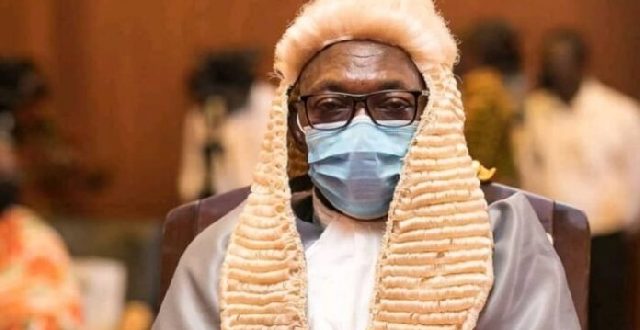 Justice Clemence Honyenuga has warned that the court he is presiding over, has the power to expunge the evidence of Dr Stephen Opuni’s second defence witness, Mr Samuel Torbi, who gave a favourable testimony to lithovit liquid fertiliser in court a little more than a week ago.

When the GHS271 million financial loss case was called on Monday, 23 May 2022 for the prosecution to cross-examine Mr Torbi, Mr Sam Codjoe, the counsel for the Ghana Cocoa Board’s former CEO, who is standing trial with businessman Seidu Agongo and the latter’s company Agricult – producers of the contentious fertilider – told the court that the doctors at the Greater Accra Regional Hospital have given the witness a week’s excuse duty to recuperate even though he has been discharged from the facility.

Justice Honuenuga said instead of waiting for the second witness, Dr Opuni should call his next witness on the next adjourned date, which is Wednesday, 25 May 2022.

“It is my candid opinion that to enable this court to effectively deal with this case and to avoid further delay, I will order that the first accused produces his next witness at the next adjourned date”, the judge said.

“The DW2 can be allowed to recover and at any time that he recovers, he could be recalled for further cross-examination”, he said, adding: “But there is proviso that this court has power to expunge the evidence of DW2 at the appropriate time.”

Dr Opuni, Mr Agongo and Agricult have been standing trial for the past four years in connection with the alleged procurement of substandard fertiliser through dubious and fraudulent means for Cocobod.

Mr Torbi, however, sang the praises of the fertilser in his evidence-in-chief and subsequent cross-examination by the lawyer of the second and third accused persons.

He said the agrochemical was the cocoa “farmer’s messiah” since it gave them plentiful yield.

The Assin Fosu farmer in the Central Region, who said he was born into cocoa farming but has been doing it commercially for 17 years, told the court that he first used lithovit in the 2015/2016 crop season.

He said Cocobod directly introduced and distributed lithovit fertiliser to the farmers and not Agricult Company Limited, the third accused in the case.

Mr Torbi told the court that he and other farmers were trained on lithovit by CHED under Cocobod in Assin Fosu and not Agricult who they “don’t know”.

After those two crop seasons, he said he has not harvested yields close that quantum again.

He said lithovit liquid fertiliser “widens” the leaves of the trees, gives them a “pure green” look and makes the flowers “very strong” so that they do not fall off when using the mist blower to spray fertiliser on them as the other fertilisers do.

As the chairman of the cocoa farmers’ cooperative in Assin Fosu for 12 years, he said, “when I used it, it made me happy and I did not get any negative effects about it”.

He also said “nobody complained to me but rather the happiness I had was the same happiness they [other farmers] also had and they said that it is now that they have believed that if they say that cocoa farming is a business, lithovit liquid fertiliser has made them realise that.”

He also denied claims that farmers drank the fertiliser in place of water.

”No my Lord, because the training they took us through means any agrochemicals we spray on our cocoa, when it enters our bodies, it will give us problems and, so, when we are spraying any insecticides or liquid fertiliser, we put on gloves, we also wear nose masks, we wear spectacles and we put on overalls and wellington boots and, so, if anyone tells you that you can drink lithovit liquid fertiliser when you are thirsty then that person is not a farmer and no farmer will say such a thing.” “My Lord, that will not be true because even a junior officer at the CHED office at the district will not say that let alone an officer at the head office”, he stressed.

Asked what he made of claims that the fertiliser was of no value, he said: “Farmers will never forgive that person because Lithovit liquid fertiliser is a farmers’ messiah and I also don’t believe that any staff from COCOBOD will come out and say such a thing”.

Asked if there will be any justification to condemn the company or the person who brought the fertiliser, Mr Torbi said: “No, my Lord because we need it”. This is the second time Mr Torbi has been absent from court so he could be cross-examined by the prosecution team.

In the first instance, Justice Honyenuga wondered why Dr Opuni’s witnesses always fell ill when it was time to get cross-examined by the prosecution.

Explaining the witness’ absence on Monday, Mr Codjoe said: “My Lord, once again I requested that he gave us a medical report so that I can send to this court, but I was informed that due to the confidentiality between a doctor and a client, I would not be given the medical report but if the court requests it-”

The judge accused him of wasting the time of the court, to which he said: “If the view of this court is that I’m wasting time then I will end here”. For her part, Chief State Attorney Evelyn Keelson suggested: “My Lord, once again, we do not know from the excuse duty what is wrong with the witness. My Lord, it is our submission that in order for this court to effectively manage the conduct of this case, it would be necessary for the court to order the medical officer who is attending to DW2 and who has issued this excuse duty to appear before the court on the next adjourned date to give further and better particulars to the court as to the ailment for which DW2 is being asked by him to be excused by this court. My Lord this will help the court to effectively manage the conduct of the case.

”My Lord this will also assist the court in making a determination whether the next witness for the first accused can be called whilst we wait for the DW2 to effectively recover. My Lord that is my submission.”

Counsel for second and third accused persons, Nutifafa Nutsukpui, on the other hand, submitted, “Respectively my Lord, we have also been given a copy of the excuse duty, which on its face, does look regular to us but we will abide by any directives the court may give in respect of the said excuse duty. Respectfully my Lord.”

Justice Honyenuga then said: “Consequently, although the suggestion to invite the doctor treating DW2 is laudable, I think it will only occasion more delay in the trial of this four-year-old criminal case. In the circumstances, this case stands adjourned to Wednesday, 25 May 2022 at 11 am for the next witness of the first accused to testify”.

Previous Bank of Ghana increases policy rate from 17% to 19%
Next Nkroful-Essiama: Motorists, residents stranded due to eroded road