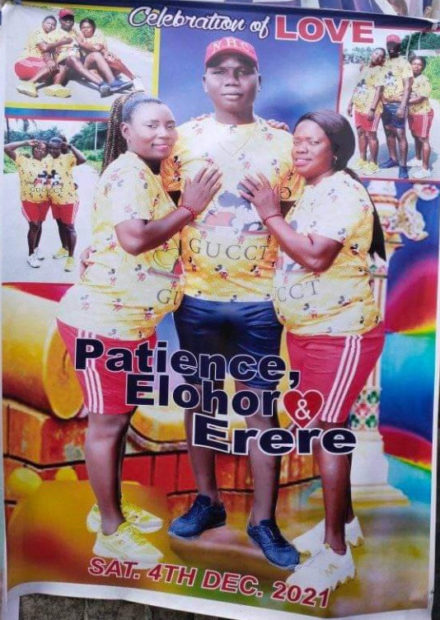 Video from the wedding of John Nana Erere, the man who tied knot with two pregnant lovers, has found its way online.

The flowery-themed wedding, which took place on Saturday, December 5, has prompted netizens to enquire about the tradition of the people of Delta State, Nigeria.

In the viral videos, Mr Erere is seen being sandwiched by his two brides, Patience and Elohor who were all smiles and donning same traditional attire, beads and gele.

“You are a man,” one of the wedding guests was heard in the background heaping praise on the groom, before approaching for a handshake

Mr Erere and his brides became internet sensations when photos of their pre-wedding photo shoot and invitation was splashed on social media.

Netizens were in awe after learning that the then to-be brides were both heavily pregnant for the same man, and were to be wedded on the same day.

The photos captured all three lovers rocking a gucci t-shirt and jersey shorts.