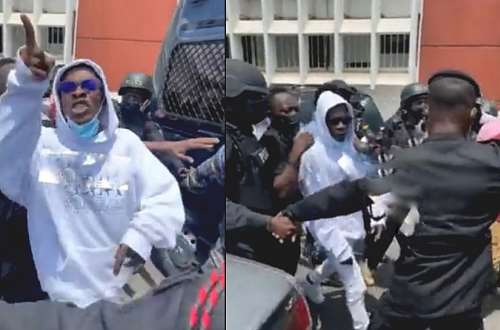 Ghanaian musician, Shatta Wale, has finally been taken to the Ankaful Prison after he was denied bail.

Shatta Wale was taken to Ankaful on Thursday night, and he is expected to spend a week thereafter he was remanded in police custody.

The court, according to the report, arrived at that decision after Shatta Wale pleaded not guilty to charges leveled against him.

And deductively from footage sighted by OdarteyGH TV, Shatta Wale is not having it easy at all inside the Ankaful Prison despite the uproar upon arrival by the inmates.

From his demeanor, Shatta Wale could be seen looking very scared and shaky in the background as he continues to spend time in jail.

Recently as he was being escorted to jail, Shatta Wale shouted that they should jail him forever, but from the look of things, he’s not shouting that anymore as all his vim is gone ­– man make weak!