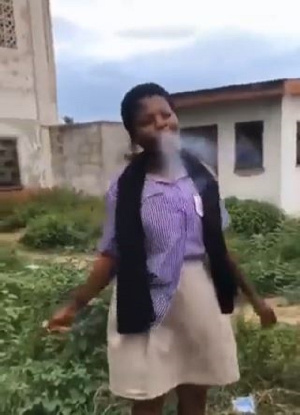 • An SHS student has been captured using drugs in uniform

• Social media users have called on the IGP to take action

• The student is allegedly a student of HOTCASS

A student has been spotted smoking a substance suspected to be “wee” in a viral video.

The young girl who was in what appears as the uniform of Holy Trinity Cathedral Senior High School, popularly known as HOTCASS, was seen smoking the substance whilst on the school’s premises.

Some male colleagues could be seen urging her on whilst she engaged in the act.

“Show them you are a bad girl who is living her life,” the voice behind the video appears to have been saying.

The video has since gone viral on social media.

Under the comment section of a Twitter user, Kaly Jay, some fans have called on the Inspector General of police to handle the matter.