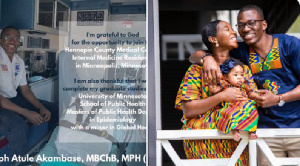 The popular phrase ‘Love has no limits’ may probably be the most appropriate to describe the situation of a medical doctor, Joseph Atule Akambase, a Ghanaian whose story has taken over social media space, Twitter.

In what seems like a testimonial by his wife, Dr. Jay Sheree Allen Akambase, the story of now Dr. Joseph Akambase has been revealed.

The story goes about how after years of fighting to attain a successful career in medicine, Dr. Akambase left behind everything, his family, friends, and his dreams to follow his heart – his wife who was also a doctor in the United States.

In the post that has garnered several views and comments on Twitter, his wife gave a chronology of how the two met in 2015 when she came to Ghana as a @NMFonline health fellow and met her now-husband who was then a medical student with the Korle Bu Teaching hospital.

Despite the attraction for each other she said, they had to go their separate ways because of the distance and impossibility of either of them letting go of their career aspirations.

In 2017, she returned to Ghana for another global health program and after they met up and caught up on things, one thing led to the other and this time, her husband, who was at the time a full-blown successful medical doctor decided to sacrifice his job for them to have a life together.

Marrying her meant he had to leave his profession in Ghana and start all over as an international medical graduate (IMG). To be an IMG, he would have to start all over, learning to qualify to be able to practice outside the country where he gained his medical certification.

As huge a step as it was, he took it! Got married, left with his wife Dr. Jay for the U.S and studied for 3 years to make up and to be able to work as an IMG.

At points in between, he had to work as an emergency medical technician (EMT) in an ambulance but according to his wife, he still made time to be a great husband while pushing for his dreams.

Read the thread below:

Tags A doctor dreram HIS How sacrificed

Previous By-elections looming at Assin North?
Next Here’s what ensued between KiDi and Cina Soul at 3Music Awards