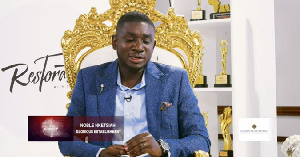 Noble Nketsiah earned a kiss from his senior in school

Renowned gospel musician Noble Nketsiah has recounted how his seniors in school mercilessly punished him following a kiss he received from the Senior Girls’ Prefect upon singing beautifully at the school’s entertainment night event.

According to the musician, his singing prowess caught the attention of his seniors during his days at Kumasi Anglican Secondary School. As a result, he was asked to entertain the student body during one of their Friday events.

“I was told I’d have to act like Michael Jackson. I remember there were many invitees because I was the surprise act on the night. People sang, danced, rapped”, he recalled while detailing how he was introduced onto the stage.

“It was now my turn. Then the lights went off. I thought it was a power outage not knowing I was the reason they put off the light.”

He continued: “They introduced me, gave me all the accolades in the world. When I got on stage, I performed. Midway through my performance, the Girls’ Prefect mounted the stage, presented a flower to me and kissed me. That was the beginning of my troubles.”

Noble Nketsiah mentioned that his senior became jealous and penalised him, an incident he will never forget. The jealousy, he said, was based on the fact that they have never received such a reception from anyone ever since they began schooling.

He said: “After the event, when I got to the dormitory, they had called all the form one students to come out. You go inside and sleep when your name is mentioned. They mentioned everyone’s name except mine. I was asked to stand till the next morning.

“They said for years, they’ve not even received a letter. But I’ve been in school for just one week and received flowers and a kiss. I weeded; I was punished severely.”

Born in Winneba in the Central Region, Noble Nketsiah started his education at the Kwame Nkrumah University of Science and Technology (KNUST) Nursery before heading to Christian Preparatory School. From there, he attended Calvary Preparatory and Junior Secondary School and finally completed his basic education at the Holy Spirit M. A. Junior Secondary School.

The product of Kumasi Anglican Secondary School gained prominence in the music space with the release of his debut album ‘Yesu Do’ in 2001.

Watch the interview below