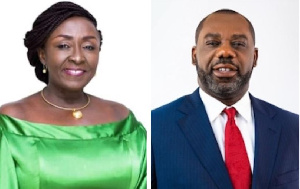 Napo has incurred the wrath of Dzifa Gomashie

Abla Dzifa Gomashie, MP, Ketu South, has responded to Dr Matthew Opoku Prempeh, Energy Minister over comments he [the minister] made on the tidal waves disaster in Keta that caused many residents displaced.

She wondered if the minister of state was eating or drinking something before he entered the studio of the radio station where he made the controversial comment.

Dr Matthew Opoku Prempeh, in a recent interview on Accra-based Asempa FM, threatened to lead a demonstration in Kumasi, should the Finance Minister make a “mistake” to include funding for the Keta sea defence project in the 2022 Budget.

The Minority in Parliament had demanded the government reviews the 2022 Budget to make provision for the construction of the Keta sea defence which started under the erstwhile NDC administration.

Speaking on the Minority’s call, the Manhyia South MP, said, “Kumasi has been flooded four times but I didn’t see Kumasi in the budget. If the Finance Minister includes the Keta sea defence Project in the budget, I will vote for zero percent (E-levy).

“Budget is a national business document that cannot solve all our problems in a day. Between 1998 and 2000, NDC went for money for sea defence at Keta, they chopped the money. They used the money for something else. When NDC was in power, Keta was still experiencing tidal waves. They went for a loan in the name of that project but they didn’t do it. President Kufuor had to contract another loan for it but they still voted against him.

“Eight years of NDC (2008-2016) I didn’t see Keta sea defence Project anywhere so if you go to opposition and you ask me to include it in the budget when Kumasi flooding is also not in the budget, we’ll protest. If the Finance Minister makes a mistake and adds it to the budget, I will lead Kumasi residents on a demonstration.”

In a reaction on Joy FM’s News Night programme on Monday, the Ketu South MP said, Napo’s comment is the most unfortunate, un-ministerial, nonparliamentary comment she had ever heard in her life.

“It smacks of bigotry, it smacks of tribalism, it is totally despicable…what was he drinking or eating before he went to that studio?” she quizzed.

Dzifa Gomashie indicated that, anytime she has to comment on the Keta sea defence project and how it is affecting her people, she was guarded by her upbringing and makes the comment in a civilized manner.

“Napo should not think that he has the trump card or the trophy for being disrespectful to the people of Ghana. When we ask for the state to pay attention to the disaster that we were bedevilled with, it was not to threaten anybody.

“It was a demand…some of us in this country are facing the force majeure which hit my specific community three times this year. And if we ask that the state does what is needed to alleviate our suffering and a Minister of State speaks in this [manner]…Napo get on with it; get on with the demonstration…”

She said, Napo claiming that there was also some flooding in the Ashanti region, cannot be compared to that which happened in the Volta region.

“It is intellectually bankrupt for him to say that because he has flooding in his place when I have flooding in my place and I have spoken about it and demanded the state does something about it, he should have the effrontery to sit on a radio station and say that if you respond to her, I would organise a demonstration. How dare you, Napo? How dare you, Minister?…can you speak with citizens of this country with some respect?” she charged.

Meanwhile, the government of Ghana has allocated GHC10million to complete the Keta sea defence project.

Ken Ofori-Atta disclosed this at a press conference on Monday, December 6.

He said, “in respect of the unfortunate tidal waves which rendered about 3,000 people homeless in Keta, we shall make the necessary budgetary allocations of at least GHC10 million to complete the Feasibility and Engineering studies for the coastal communities adversely affected.

“We will broaden the scope of the study to consider a more comprehensive solution to protect Ghana’s 540 Km of coastline, including the 149 Km between Aflao and Prampram.”

It is unclear if the Energy Minister will go ahead with his threat to mobilise residents of Kumasi to demonstrate against his own government for allocating funds to complete the sea defence project.

Source: www.ghanaweb.com
Related Topics:DzifaNAPO
Up Next

Approval of 1.75% e-levy: That’s why God made us the majority in parliament – Ofori-Atta