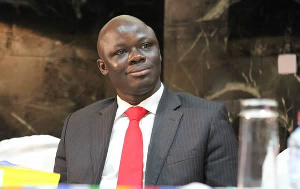 Renowned lawyer and television personality Samson Lardy Anyenini has disclosed how he sacked a representative of a top politician who wanted to bribe investigative journalist Manasseh Azure with a car and mouth-watering cash to drop a story he was working on.

Samson who is the lawyer of the investigative journalist made this known in a piece he wrote on Integrity and the need to guard it.

He said Manasseh Azure at the time had just a rickety motorbike he used and although several offers came his way, he held on to his integrity and rejected them.

“I was contacted to tell him to drop a story for a good car and cash in one case. I cautioned the elderly “respectable” man sent by a big politician never to try that on Manasseh. I politely got him out of my law office.

Manasseh has risked his life to tell stories that those who hate the mention of his name today have commended highly and successfully made great political capital. He and his journalism have not changed,” he said in a piece published on myjoyonline.com.

To Samson Lardy Anyenini, it’s imperative that people act in integrity in service to God and the country in order to nip corruption in the bud.