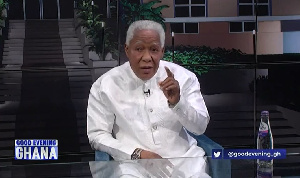 • He said, it was initiated to address the housing problems for workers

• He revealed that, OAS Limited was to construct a 5,000 housing unit for workers

Enoch Teye (E.T.) Mensah, a Member of the Council of State, has been explaining how the Saglemi Housing project was conceived under the John Evans Atta Mills administration.

According to him, the late President told him as a Minister of State in charge of Works and Housing that, he would want to do something to address the housing problems for workers.

He said, at that time the STX deal to construct a 200,000 housing unit for the security services had become a fiasco, which led him on behalf of the government of Ghana to abrogate the STX contract.

A committee of housing was then formed under the ministry and an announcement was made for an alternative contractor.

Mr Mensah explained during an interview on Good Evening Ghana Tuesday, August 3, stating the contract was awarded to Construtora OAS Limited for the construction of a 5,000 affordable housing unit.

“We were lucky that over the years, the government had acquired some land to build houses for the people; the housing committee [I formed] selected Saglemi…We had to prepare to go to Parliament [to lay the offer before the house]…it was close to elections at the time and so, the President decided that he will approve it, thus, give executive approval to the proposal so that we take it to Parliament, that was how come President Mills gave executive approval; that was his project,” he indicated.

He noted that, Construtora OAS Limited started work around the facts and data that was presented to Parliament given birth to the Saglemi Housing project.

“…Again, we brought in the offtaker thus Ghana Home Loans to offtake all 5,000 housing units and to hand them to the workers. We have then even registered workers who were going to occupy it,” he said.

When asked by the host of the show that Ghana Home Loans was to offtake and pay the money to who, the former Ningo-Prampram MP said, the loans were to be paid to Credit Suisse, an investment banking company.

“Because the loan was lodged in Bank of Ghana and the interest of the creditor was who was going to pay…,” Mr Mensah stressed.

He stated further anybody who would say the cost of the housing project excluded sewage, road and the service plot then he “doesn’t know what he is talking about”.

“I’m surprised at what is happening because when Prof Mills died and some of us were removed [from the ministry] and new persons were appointed, I prepared a detailed handing over notes and I gave Alhaji Collins Dauda my copy. He knows it and he should have a copy as well,” E. T. Mensah noted.