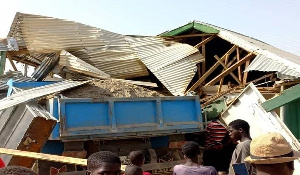 How some shop owners in Wa escaped death

A provision shop owner and a seamstress have escaped death by the whiskers in the Wa Municipality of the Upper West Region after a tipper truck fully loaded with sand veered off the road and ran into their shops, destroying parts of the shops in the process.

The incident occurred on Wednesday, February 16, 2022, when the truck with registration number GW 9829 R which was coming from the Wa Senior High direction of the Banjan street heading to the Lawmars drinking spot junction, burst its front tire of the passenger side, losing control of the vehicle in the process and eventually rammed the truck into the shops.

An eye witness, Iddrisu Salifu narrating the incident to GhanaWeb’s Upper West Regional correspondent, IIyaas Alhassan said the tipper truck first demolished a kebab stand situated in front of the shops whose attendant had not yet come to work, before demolishing the veranda to the provision store and finally running into the tailoring shop.

He added that: “the seamstress, as well as her apprentices in the other shop near the provision shop, had to run very fast for their dear lives to escape what would have been a tragedy here. Immediately the truck came to a halt, the driver went straight into the provision store to see whether or not something had happened to the owner but luckily, the woman was inside the shop when the incident happened and nothing happened to her.” 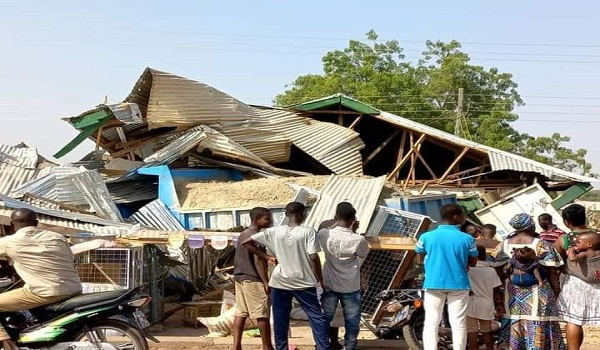 There was no casualty recorded from the incident.

Attempts to get a response from the shop owner and driver was unsuccessful as they both appeared too traumatized to utter a word.

The Police were at the accident scene to assess the situation in order to commence investigations into the matter but efforts to speak to them were unsuccessful as they declined to comment.

Tags DEATH ESCAPED How IN Owners SHOP SOME WA