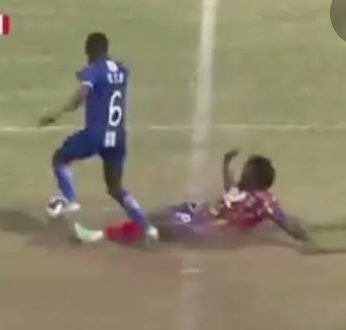 Sulley Muntari made his start for Accra Hearts of Oak in their drawn game against Real Tamale United (RTU) in the Ghana Premier League on Sunday, February 13, 2022.

The former Black Stars midfielder was heavily applauded by both Accra Hearts of Oak and RTU supporters when he came off the pitch after the 78th-minute mark.

Muntari had a good game against RTU at the Aliu Mahama Sports Stadium in Tamale despite the Phobians’ inability to win the game.

However, there was a little scuffle between Sulley Muntari and RTU’s Hedir Mohammed following a rush tackle in the 57th minute.

Hedir Mohammed went hard on Sulley Muntari from an earlier encounter between them and the Hearts of Oak player was not happy about it.

The two however made peace after the interview with the experienced midfielder exhibiting maturity.

Watch the encounter between the two players in the post below: