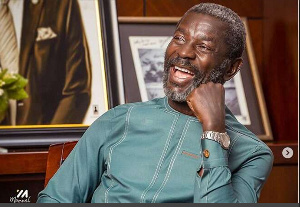 Amoabeng was ready to pay US$200,000 to join the Virgin Galactic spaceship

He is promoting his book, ‘The UT Story – Humble Beginnings’

Captain Prince Kofi Amoabeng (Rtd.) has spoken about an attempt he made to join the Virgin Galactic Spaceship’s trip to outer space.

He stated that he had wanted to secure a seat on the spaceship to help serve a number of reasons, among others to be a distraction for him at a point and to also motivate a book he wanted to write.

Sharing bits of his life story on Citi TV’s ‘Point Of View’ programme that aired on December 8, 2021, the co-founder of UT Bank said he refrained from buying the US$200,000 seat also due to financial reasons.

“When Virgin Galactic was launched, you were supposed to pay US$200,000 and you will be on the first trip to space. So I was interested. I said fine, I will go on that trip and when I come back, I will write a book and the book will be called Kukurantumi to space.

“To show how a Kukurantumi boy can end up going to space, and I was very serious about it. The only reason why it didn’t happen was that I asked them (to) give me an estimated time, they said they couldn’t tell.

“Are you going to pay me interest on the 200,000, they said no. I said no! I am a finance guy, you cannot take my 200,000 and not know when I am going to be paid and not paying interest. So I shelved it,” he told programme host Bernard Avle.

He was on the show to discuss his book, ‘The UT Story – Humble Beginnings.’ The first in a three-part series looks at his days in the army and how he transited from the military into running a business concern that was swallowed by Ghana’s banking sector clean-up.

He said the idea to write a book was to help tell the full story of the UT Bank story from its beginning, steady rise through to its collapse.

Amoabeng also spoke about how golf played a crucial role in occupying him amid the legal back and forth that the company he helped found was going through.

Joe Ghartey Speaks on the role of Parliament in fighting corruption