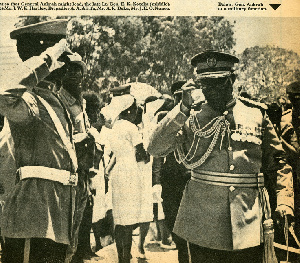 In Ghana, there have not been many firsts in the negative sense when it comes to the political history of the country, and more so, at the highest level of the presidency but at least, from the top of the head, the name of the late former president of Ghana, John Evans Atta Mills, rings a bell towards one significant historical event.

Lieutenant General Joseph Ankrah resigned as Head of State on April 2, 1969, under one of the most unimaginable circumstances for any leader in this country: he admitted that he had received money for political purposes from a private company.

His resignation however sent him into the banking sector where he became the head of the National Investment Bank, right after leaving the army, reports ghanaianmuseum.com.

How Ankrah became Head of State

In 1966, Ghana experienced its first coup d’état, toppling the government of Kwame Nkrumah, and bringing in the National Liberation Council.

Lt. Gen. Joseph Ankrah became the Head of state and Chairman of the NLC.

How Ankrah resigned as Head of State

According to the ghanaianmuseum.com report, in January 1967, Lt.-Gen Ankrah played a critical role in the mediation talks between the warring factions of the Biafra war in Nigeria.

During this period, it came to be known that “monies changed hands” between Joseph Ankrah and Nzerebe, a Nigerian businessman.

Pressure started mounting on the Head of State to resign, especially after a commission of enquiry found him guilty of the allegations.

This was however beyond the fact that the results of an opinion poll conducted by Nzerebe, who was contracted by the NLC for that purpose, showed that Joseph Ankrah was the most popular person in Ghana from a field of prominent people including Afrifa and Busia. General Ankrah eventually resigned after he was forced to do so over the bribery allegations, and also because it. Led by Lt. General Joseph Arthur Ankrah in 1966, the coup makers gave their justifications on the grounds of issues such as corruption and the claim that the Kwame Nkrumah-led Convention People’s Party (CPP) had become abusive.

These were some of the reasons contained in a 1966 letter penned under the name of General Ankrah, to the President of the United States of America at the time, Lyndon Baines Johnson.

In that letter which has been sighted by GhanaWeb and sourced from the Johnson Library, the National Security File, Special Head of State Correspondence File, Ghana, 3/24/66–10/6/66, Gen. Ankrah said that the coup was necessary to liberate the people of Ghana since Kwame Nkrumah had lost faith with the people.

“My dear President Johnson, I am taking this opportunity to write to you personally in order to explain the circumstances that led to the recent change of government in Ghana, and to discuss some of the most crucial problems which the National Liberation Council inherited from the old regime since it assumed power on 24th February, 1966.

“In view of the fact that there had recently been changes of governments in a number of African States, I thought my explanation would enable you to make a correct assessment of events in Ghana and to view the military take-over in its correct perspective.

“The Army and the Police Services were compelled to intervene to stem the tide of a growing communist menace in Ghana and the catastrophic deterioration of our economy. As I told the people of Ghana in my nation-wide radio and television broadcast on 28th February, “this grave step was taken because no other means was available to restore to [Page 459] the people of Ghana the blessings of liberty, justice, happiness and prosperity for which we all have struggled for so long”. By his arbitrary use of power, Nkrumah lost the confidence and support of the people of Ghana and in keeping with our tradition we had to remove him from power by the only means available to us,” portions of his letter read.

was believed that this illegality might have influenced the outcome of the polls.

Ankrah was born on 18 August 1915 in Accra to the Ga family of Samuel Paul Cofie Ankrah, an overseer for the Christian Missionary Society and Beatrice Abashie Quaynor, a trader.

Ankrah began his schooling in 1921 at the Wesleyan Methodist School in Accra, where his nickname was ‘Ankrah Patapaa’ for his “forcefulness in arguments and always playing leadership role among his mates.”

In 1932, he entered Accra Academy, one of the leading secondary schools in Ghana, where he established himself as a good football player. He obtained the Senior Cambridge School Certificate in 1937.

He then joined the Ghana Civil Service.

Previous Student stabbed in ‘gang’ fight
Next If it were Ghana, they’d be praying for your death – Afia Pokuaa reacts to Justin Bieber’s ill-health