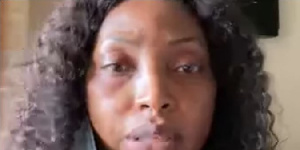 • According to her, she was enlightened by some health professionals on COVID-19testing

• Over 400,000 passengers have been tested for COVID-19 at the KIA since it re-opened to international travels in September 2020

The controversial traveller who sparked unrest about the testing processes at the Kotoka International Airport has rendered an apology for accusing the KIA of misconduct of the COVID-19 protocols, a report by Citi News has revealed.

Expressing her displeasure in a 12-minute video that went viral on social media, she claimed the tests being carried out at the Airport were fake, mentioning that there was discrimination at KIA where people with foreign passports were made to undergo mandatory isolation at a hotel when tested positive in order to exploit them

A release by the Ghana Health Service, however, described her utterances as “entirely false.”

Ivy Ankrah has in another video, made a u-turn about her utterances stating that she sought education from some health personnel and “they said it is possible that you can test within 24 hours and still test positive so I am here to say I am sorry.”

Former Deputy Health Minister, Dr Okoe-Boye, in a video, refuted the claims by Ivy Ankrah. The member of the government’s COVID-19 team, in a video, laid out the protocols processes at the KIA.

More than 400,000 passengers have been tested for COVID-19 at the KIA, upon arrival, since its re-opening to international travelling in September 2020.

Passengers are mandated to have with them a negative COVID-19 PCR test result (not more than 72 hours) in English from an endorsed laboratory from their country of origin.

Previous People&Places: The 98-yr-old studio with rare photos of Nkrumah, Akufo-Addo’s family, others
Next ‘We love together, we die together’ – Alleged killer of Police Constable leaves note