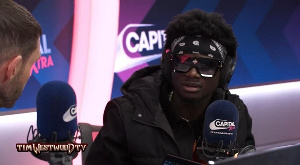 Kuami Eugene has thrown in a reminder that he can choose to be a rapper if he wants to be.

This came after he visited Tim Westwood’s session for a freestyle. The Ghanaian singer who is in London after his sold-out show with KiDi was out on the spot to rap by the globally famous host and delivered what would be called ‘bars’.

During his appearance on the show which has hosted several musicians, Kuami Eugene, who is a singer decided to show his rap prowess by freestyling.

He rapped about his success, growth and more. “I came not long but I work so hard so I am young and rich for a purpose. My mum told me a range rover can’t put your face on a record,” he rapped.

“No matter how big you get, you still got to put in some effort, you got to work so hard to see your face in the Heathrow airport,” he added. Kuami Eugene’s session on the international platform lasted for about 7 minutes in which in another part, he decided to sing.