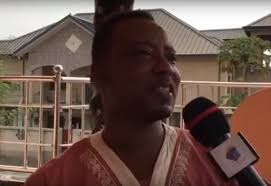 Prophet criticized for selling his chapel to fetish priestess

Apae Live denies wasting proceeds from sale of his chapel

Computer Man fights Apae Live for his selling his chapel

Reverend Tony Asamoah Boateng popularly known as Apae Live has finally opened up about his decision to sell off his chapel to former fetish priestess Patricia Oduro Koranteng otherwise known as Nana Agradaa.

Following news that Apae live sold off his chapel located at Weija some five years ago to the fetish priestess who recently repented to embark on Christian ministry, Rev. Asamoah Boateng has been at the receiving end of some heavy criticisms for his decision.

But speaking in a recent interview with Oman Channel, the founder and leader of Great Light Worship Center noted that he thought through his decision very well before going ahead with it.

According to him, he only sold the chapel and not his church and that the money has since been put to good use in growing his ministry.

“It is true we sold the chapel. But selling the chapel does not mean I sold the church members. Even the bible says God does not live in a chapel built by man, if we talk of a chapel, it is within your heart.

“When we sold the chapel, I said that I was going to build a new chapel in three months. I have achieved the goal by building a new chapel in exactly three months and even those who criticized me and doubted me failed to show up for the opening. The new chapel is located at Koklobite,” he said.

On how the proceeds from the sale have helped his ministry, Apae Live further disclosed that among other things he has acquired two new buses for his church.

“By the grace of God, I used some of the money to buy two buses. One is parked outside at the moment and the other one we rent it out. Aside from that we were able to build a chapel in three months. I know of some pastors who sold their chapels and were not able to put the money to good use.

“My brother Rev. Apraku sold his chapel but did not put the money to good use and he’s not the only person to have done that; I know of about three more pastors who have suffered the same fate. When you sell God’s property you need to make sure you put the money back into the work of God. I have about four plots around the chapel that I am planning to build a hostel to house people who come for services. So when you talk about injudicious persons I am not one of them,” he noted.

Prophet Eric Amposah of the Hope Generation Ministry was one of the staunch critics of Apae Live over his decision to sell his chapel.

According to Prophet Amponsah also known as Computer Man, he tried without success to convince his colleague to rescind the decision which he maintains was wrong.

“I and other pastors numbering about 30 called him and asked him to give us the money so we return it to Agradaa and tell her he won’t sell the property again. Because selling God’s chapel will incur a curse on him but he didn’t listen to us. The next morning, he bought a Hyundai Genesis and then later bought a house at Top Base (Gbawe). I confronted him about selling a chapel of God and he told me to mind my business because it is not my issue to talk about,” Computer Man stated in an old interview with Oman Channel.

Source: www.ghanaweb.com
Related Topics:Agradaa?Apaelive
Up Next