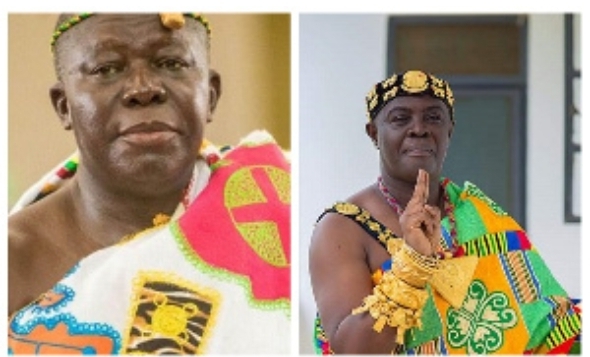 I am not forcing anyone to serve me, says Otumfuo

Otumfuo speaking at the first meeting of the Asanteman Traditional Council, stated that he will not allow the authority of the Asantehene be undermined under his watch.

“It is not in my time. If you say you are a man, I am also a man. If that is how it will be then we will face-off. I can’t talk anyhow because I was brought up well. I was brought up well so I talk with decorum. If chieftaincy has been bestowed on you and you don’t have sense calm down and let’s address issues on the tenets of history,” the Otumfuo fumed.

The comment by the Asantehene comes on the back of a recent outburst by the Dormaahene accusing the people of Ashanti of twisting history in their favour.

But speaking to his chiefs at the meeting, Otumfuo noted that it was rather the Paramount Chief of Dormaa who is twisting history to fuel his sense of independence.

According to the Otumfuo, the Dormaahene owes allegiance to the Asantehene, having taken his oath of office at the Manhyia Palace.

“I want to remind those who have probably forgotten history and are speaking out of ignorance, we haven’t forced anyone to serve us, it is even an honour to serve the Golden Stool. Agyeman Badu was a teacher, he swore right here to my uncle before ascending the throne as the chief of Dormaa,” Otumfuo said.

Describing the rebellion against his authority as an act of arrogance and aggression, the Otumfuo noted that he does not require the reverence of the Dormaahene as he already has at his disposable several paramount chiefs who regard him as their lord.

“I’ve never intended on making anyone a servant. Mo and Banda all pay allegiance here. Dormaa owes allegiance here. So what is with the arrogance and aggression? I don’t even need you. I have 65 paramount chiefs, better ones. If all these people say I am their lord and you say I am not, why do I have to care about just you?” Otumfuo questioned.

Oseadeeyo Agyemang Badu II, in a viral Facebook video sighted by GhanaWeb, stated that history has been distorted by the Asante’s to suit their interest.

He said, some chiefs in Ghana talk as if they are greater than the Almighty God but “nobody is greater than God.” Going into history, Oseadeeyo Agyemang Badu II said, in the year 1640, the then chief of Akwamu, Ansa Sasraku, was going about saying when he dies, none of the twins of his sister can succeed him; this continued for a while till he died and it happened that there was confusion among the citizenry.

Dormaahene said, amid the confusion, the people of Kumawu took over some territories across the country and even extended to Côte d’Ivoire but “when they got to present-day Asante, that territory was under the Denkyirahene. Today they have an appellation as ‘asante kotoko kum apem a apem beba’ [if you kill thousand, thousand will come] but do you know that of the people of Bono, theirs is ‘abono kyen apem’ [Bonos are more than thousand]”

Oseadeeyo Agyemang Badu II explained, “this means that, when we got to Denkyira, Dormaahene had his territory; so the two were not fighting each other, our brothers from Asante – they were a group of people who had come together – but they broke away from Ntim Gyakari…and decided to fight the people of Dormaa because they were defeated six times…

“You have fallen for the history that Okomfo Anokye planted a tree both in Asante and Kumawu and because the tree died that is why the place is called Kumawu; that is a lie. When we talk about Kumasi, it means that they were labourers. When we got to the place known as Asante today, the people of Kumasi were under Denkyira and they were responsible for getting Denkyirahene firewood that is ‘akuma ase’ but today, because of their population, they have changed it. It means ‘akuma ase hene’ and not Kum. If you are a chief and you are brilliant and you know the law, people are afraid of you…,” Dormaahene stressed.

Previous Schoolboy, 12, killed in crash on his way to play football
Next NAM 1 was involved in money laundering – Report