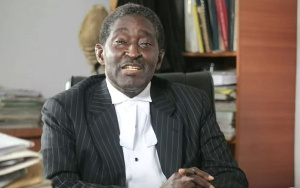 Captain (Rtd) Nkrabea Effah-Dartey has recounted the number of times he has survived near-death experiences throughout his life.

According to him, he has been involved in 66 motor accidents in his lifetime but has been saved by the Grace of God through it all.

“I saw the June 4th revolution and took part in it and with everything that has gone on since then till now, it is by the Grace of God that I am still alive here today. I have survived 66 motor accidents and on three different occasions, soldiers have raided my home at Burma Camp in a quest to assassinate me and it is truly God who has saved me from all this.”

The renowned lawyer and politician further recounted the number of times he has also been to prison, adding, “I have been prison three times and trust me, God has done a lot of for me in those times up until now.”

Lawyer Captain (Rtd) Effah-Dartey made the revelation in a recent interview with Kofi Adomah on Kofi TV when a question was posed to him as to why he keeps a phrase ‘By the Grace of God’ captured on his complimentary card.

Captain (Rtd) Effah-Dartey is an ex-military officer and politician belonging to the New Patriotic Party. He is noted for his influence in the party’s rise to democratic governance.