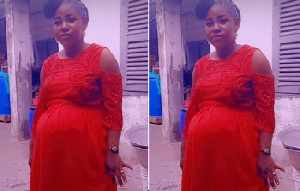 The husband of Josephine Panyin Mensah, the supposed pregnant woman in Takoradi who also allegedly faked her kidnap and claimed her fresh baby was taken away, appeared before the Takoradi Circuit Court ‘A’ as the first witness in the case.

Michael Simons is one of the eight witnesses expected to give testimony in the much-talked-about trial which commenced at the court presided over by His Honour, Michael Ampadu.

In his evidence-in-chief, the husband told the Court that he physically saw Josephine, his wife actually pregnant.

This was after the lawyer for the accused, Fiifi Buckman had asked the witness whether he suspected the wife was pregnant or he knew Josephine was pregnant, during cross-examination.

“I knew my wife was pregnant”, he told the Court.

The lawyer then asked, “Did you see the physical stomach of your wife without a cloth”?

The husband replied, “Yes I physically saw her stomach pregnant”.

The husband went on to tell the Court that the State of the wife’s stomach currently is different from when she was pregnant and that currently, the stomach is flat.

He also indicated that they stayed together as a couple for two and half years before the wife got pregnant.

The Prosecutor in the case Suptendent Emmanuel Basintele in his re-examination asked the husband whether he was aware that his statement that he physically saw her wife pregnant contraindicated with what he stated in paragraph nine of his witness statement?

“You stated that you did not see the accused’s belly from the sixth month”, the Prosecutor asked the first witness in the case.

At this point, the lawyer for the accused, Fiifi Buckman, intervened and told the Court that the question was not a re-examinable one.

The Court upheld what the lawyer said and indicated that whether there was a contradiction or not, it was up to the court to interpret according to the law.

The next person to give testimony in the case was Agnes Essel, the accused person’s Mother. She said she was not around when her daughter gave her statement to the Police.

She also asserted that the Police told her to say her daughter was not pregnant otherwise they would lock her up adding “and I was locked up till the following morning”.