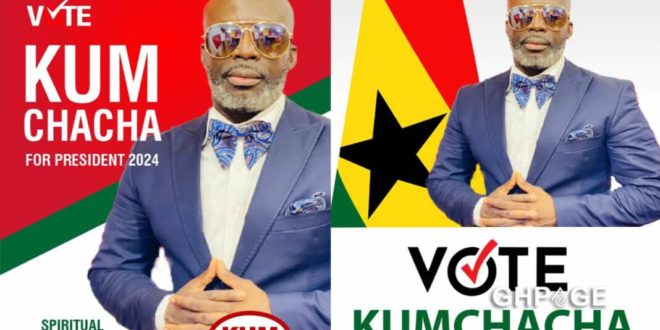 Ghanaian preacher Nicholas Osei, popularly known as Prophet Kumchacha, has vowed to deal with NAM 1 if Ghanaians vote for him to become the next president after 2024’s general elections.

About a week ago, flyers from the founder and leader of Heaven’s Gate Ministries camp announcing his intention to run for the 2024 Presidential race surfaced online.

Alot of Ghanaians have since been making a mockery of his political ambition. Still, the man of God has stood his ground and refused to kowtow to the negative comments from his attackers.

Replying to detractors like Arnold and the likes who are convinced that Kumchacha is wasting his money and energy on an ambition which is never going to materialize, the man of God has vowed to retrieve all the locked-up cash at Menzgold.

In an interview with Ghpage’s Abena Gold, Kumchacha blasted the Akufo Addo-led NPP government for failing to prosecute NAM 1.

He continued that the first thing he’ll do if he becomes the next president is to ban 2 years’ rent advance because it makes no sense citing how young tenants are pressured by their landlords to pay as huge sums of monies as rent advance.

Aside from the above-listed promises, Kumchacha also talked about other crucial things which will help revamp Ghana’ssinking economy.

Tags CASH I KUMCHACHA LOCKED menzgold RETRIEVE UP WILL