Home / GENERAL NEWS / ‘If I hurt anyone with my tough decisions, I’m sorry’ – Outgoing IGP at farewell parade 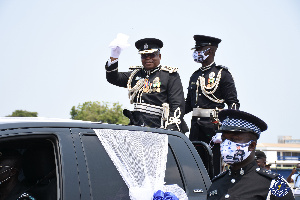 • In his final address to officers, he spoke of positives and apologized for hard decisions

Outgoing Inspector General of Police, Peter Oppong-Boanuh, has apologized to personnel for some of the tough decisions that he took during his time as police chief.

Whiles addressing staff and guests during the farewell parade held for him at the National Police Training School at Tesano in Accra, he spoke about positives he chalked in office but admitted that human as he was, there must have been some negatives.

He particularly cited the instances of staff transfers to other region and far flung places to serve as one area he knew had hurt most personnel.

“I am sure I contributed a lot of positive things, but being human, I am also sure that I made some mistakes. Again, I may have hurt or disappointed some people by some of the descisions I took.

“Especially, I am aware that as IGP, a lot of people who got frustrated and disappointed by transfers and postings to (rural) areas, because obviously everybody wants to be in the capital environment.

“If I hurt anybody by any such decisions, I am sorry … I thought it necessary at that time for the good people of this country,” he stressed.

He also called on staff to support the incoming Acting IGP George Akuffo Dampare in the discharge of his mandate as police chief.

“I am bowing out today with pride and a strong conviction that this service is blessed with a number of committed officers who are going to support the incoming IGP to successfully continue from where I left.

“It is important to underline that the role of the security agencies, which is internally led by the police service, cannot be overemphasized.

“In the midst of resource constraints and other organizational challenges, we have supported our country to attain global accolades. I believe we can do more to become one of the most peaceful countries in the world, with the rest of leadership and supply of resources to the service.

“It is in this vein, that I want to encourage all personnel of the service and the good people of this country to give the necessary support to the incoming IGP and his administration to discharge the core mandate of the police service in maintaining law and order,” he added.

The event was attended by the Minister of Interior, Ambrose Dery; the Greater Accra Regional Minister, Henry Quartey and also by heads of the other security services and the police top brass.

A parade was held with male and female officers who went through the motions under parade commander before they sang celebratory songs (known in local parlance as jama), all of them in face masks in observance of COVID-19 protocols.

Officers on horseback were also present through the process before eventually the official pullout ceremony was undertaken as the IGP stood behind a pickup truck waving at the dignitaries present with a white handkerchief.

The President announced early this month that in lieu of Oppong-Boanuh’s upcoming retirement, COP Akuffo Dampare – the then Director of Administration at the Ghana Police Service should act as IGP till a substantive police chief is appointed.

It is widely expected that the 51-year-old will be confirmed in due course as the substantive police chief. His appointment was largely met with praise given that he has risen through the ranks starting out as a corporal at age of 20 to become the IGP over three decades later.

Previous Kotoko CEO caught in contradictions over Fabio Gama’s deal
Next Scam alert: My daughter does not have Facebook, Instagram accounts – Mahama