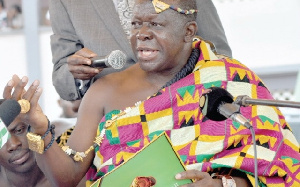 If you’re a man, I’m also a man – Otumfuo to Dormaahene

The Ashantehene Otumfuo Osei Tutu II has disclosed that he has no intention of forcefully coercing anybody to kowtow to him.

Speaking at the first Council Meeting in the Ashanti Region, the Ashantehene indicated that his intention is to give a facelift to those willing to work under him.

According to him, if others are willing to submit in order to gain the needed development and progress in their respective areas, “I don’t think you have any impact, those who want to be lifted to a dignified status would be accorded that and helped.”

Otumfuo further stated that he would work vigorously for the betterment of areas in Bono East that are under his jurisdiction to have the best that they deserved.

“If you cannot fight for Ashanteman, please vacate the seat for those who can. If you cannot sacrifice like our forefathers, then you don’t deserve the seat.

“Bono East too, anybody trying to raise his or her shoulders must be careful, not under my watch. If you claim you are a man, I am also a man. And with Drobohene my uncle lifted you up in 1948.” Otumfuo disclosed.

“If you say today, no one can make the other a subject, who is making the other a servant here. No one has made the neighbour a servant,” he emphasized.

It comes after the Dormaahene appears to have challenged the jurisdiction of the Asantehene in portions of Dormaa.

The Dormaahene Osagyefo Oseadeyo Agyeman II, had stated that no part of his traditional area in the then Brong-Ahafo Region is within the authority of the Ashantehene, Otumfuo Osei Tutu II.