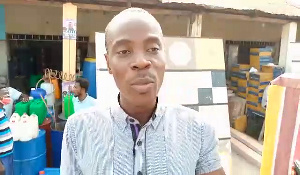 Eastern regional correspondent for Accra-based Oman FM journalist, Isaac Ofori, was on Tuesday afternoon allegedly assaulted by some palace thugs and had his phone seized by the hoodlums during a visit by the Inspector General of Police (IGP) to the Paramount Chief of Asamankese in the Eastern Region.

The incident happened in the full glare of the IGP, Dr. George Akuffo Dampare when he paid a courtesy call on the Paramount Chief of the Asamankese Traditional Area.

His visit followed Monday’s seizure and occupation of the Asamankese palace by the Chief of Aworasa, Barima Pobi Asomanin II who claimed legitimacy to the throne.

Mr. Dampare had visited the chief, Osabarima Adu Darko III when the thugs who were instigated by the chief’s hostility towards the journalist pounced on him and beat the hell out of him.

Narrating his ordeal to GhanaWeb, the journalist said while the chief and his elders were escorting the IGP out of the palace after the meeting, one of the young men with the chief identified him as one of the journalists who were in the place during the raid the previous day.

He furthered that the paramount chief who was not equally enthused about his presence at the palace on Tuesday, December 21 enquired of his mission to his palace.

“I took out my phone to take a picture of the IGP and the chief when one of the boys identified me as one of the journalists who were in the palace Monday.

“Then the paramount chief asked, “you, haven’t I warned you not to come to this palace again?” he narrated further.

Isaac Ofori recounted further that following the question posed to him by Osabarima Adu Darko III, one of the boys pulled him to one side of the palace where he together with about fifteen others pounced on him, assaulting him severely before the IGP.

“Thereafter, one of the boys from the palace pulled me. One of them snatched my phone in the process and another dragged me to a corner.

“They started beating me right before the IGP and other police personnel. I suffered bruises on my forehead and a swollen arm,” said the journalist.

He said the IGP thereafter called him into the palace and enquired of the identities of his assailants after which two of them were immediately handcuffed by the police personnel and locked up at the Asamankese police station.

The others managed to escape arrest.

His statement was taken and a police medical form was issued to him where he visited the Asamankese Government Hospital for treatment after which he was discharged.

Asked if he had issues with the chief or was ever warned against going to the palace, he answered in the negative.

Police investigations continue into the case.

Source: www.ghanaweb.com
Related Topics:IGPJOURNALIST
Up Next