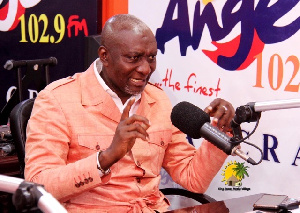 IGP only gave signals and delivered message, he was completely apt – Al Wahab

International Diplomatic Consultant, Farouk Al Wahab, has described the response by the Inspector General of Police (IGP), Dr. George Akuffo Dampare, to UK High Commissioner in Ghana as the most suitable comment.

He admitted that IGP’s comment directed to the commissioner, Harriet Thompson, was completely apt and right–something he sees no problem with.

Commenting on the matter on the Anopa Bofo morning show hosted by Nana Yaa Brefo Wednesday, June 1, 2022, Mr Al Wahab stated that security issues of a state are deemed to be operations and work of the police and not diplomatic calls.

He emphasised that nothing more or less was expected from the IGP because the police as an institution of the state are mandated to protect, regulate and ensure compliance with the law.

According to the renowned international consultant, Dr Akuffo Dampare as a trained police officer only acted in that capacity by “writing, interpreting through a sentence because they [police] give signals and messages.”

Al-Wahab also mentioned that though the majority of the Ghanaian populace including Harriet Thompson might have not liked the position or language with which the IGP communicated, the fact is that the police “does not write grammar.”

“With the IGP, you don’t expect him to write a diplomatic language; he wrote an institutional language of a force. So for me, I have no single problem with the IGP’s comment because it was completely right. That was completely apt, correct. That is how police write” he added.

He thus rubbished the medium used by the British High Commissioner noting that, she should have known better as a “career diplomat” by channelling her grievances to the diplomatic head of the foreign ministry due to her vast experience on the continent.

It is remembered that the Inspector-General of the Ghana Police Service, Dr George Akuffo Dampare, on Monday, May 31, 2022, responded to the British High Commissioner following her comments on the arrest of #fixthecountry convenor Oliver Barker-Vormawor.

He was arrested on May 17, 2022, by the Police for a traffic-related offense together with other offenders, for which he was arraigned before court and subsequently granted a GH₵30,000 bail after pleading not guilty to the charges.

The social media advocate’s arrest followed his earlier arrest which subsequently led to his remand for treason felony charges after a social media post threatening a coupe – a case that is currently being heard by the court.

The High Commissioner, Harriet Thompson, in a tweet, indicated that she awaits to see where the #fixthecountry convenor’s interdiction leads.

This the IGP deemed an attempt to undermine the law enforcement procedures of the police service hence the need to respond to same by asking her to restrain herself from interfering in the matters of the security agencies.