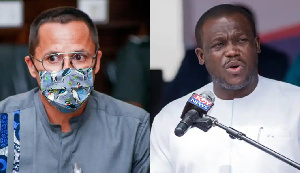 Samuel Nartey George’s altercation with the former Australian High Commissioner over his alleged involvement in the promotion of homosexuality in the country has come up in the wake of the Inspector-General of Police and the British High Commissioner’s row.

Sam Nartey George is on record to have threatened to beat Gregory Andrews if he does not respect the laws of Ghana and behaved like a diplomat representing his country in Ghana.

In an interview with Nana Aba Anamoah on Starr Chart, Wednesday, May 12, 2021, which is now trending on Twitter, the Ningo Prampram MP said, the High Commissioner signed a letter of credence which indicates that he should respect the laws of Ghana and these laws that he vowed to respect, “do not allow you to do homosexuality.”

“Then you, with your two left legs, you leave Australia and come to Ghana to come and redeem your image…as somebody who doesn’t know his identity, [he] has come to Ghana here and try and reinvent himself and then wants to now come and dictate to us that we must legalise ‘supi supi’,” he said.

Sam George who was upset insulted the High Commissioner with the ‘F’ word in Ga and vowed to beat him up, “if he decides not to behave like a diplomat.”

He then asked the High Commissioner if he can go to Saudi Arabia and tell the Crown Prince that “because he is an Australian aborigine [so they should legalize homosexuality]”.

When prompted by the host Nana Aba Anamoah that the Australian High Commissioner did not say that, Nartey George said, Gregory Andrews before Parliament went on recess called on the Speaker of Parliament, “and tried to lobby the Speaker for it and he’s been all over the place trying to say that it’s a human right issue, it’s not a human right issue”.

Dampare dominates the news with a letter to UK envoy

Inspector-General of Police George Akuffo Dampare has been in the news for the better part of Tuesday, May 31, 2022, after a four-page letter he signed was published by the Ghana Police Service.