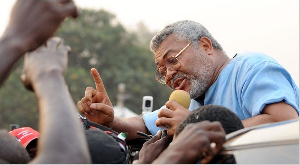 Former President Jerry John Rawlings has bared his teeth at leading NDC member Prof. Kwamina Ato Ahwoi over what he describes as a “callous agenda of bile” being perpetuated the latter.

While taking to his social media platforms to commend the Asantehene, Otumfuo Osei Tutu II, for resolving the issue with the Bantamahene, Rawlings took the opportunity to react to his former bosom friend who recently launched a book about their relationship.

Prof Ahwoi on Friday, July 31 launched a book titled “Working with Rawlings” in which among other things revealed circumstances leading to the disaffection between them.

He also gave an account of how late Professor John Evan Atta Mills almost resigned as president due to some actions by the NDC founder.

But reacting to some of the assertions by the former Minister of Local Government and Rural Development, Rawlings noted that although he was tired of engaging in a banter to defend his past actions he would deal with allegations by Prof Ahwoi.

“Much as I find it tiring and tedious to be engaging in self defence when I have given my all, all these years, I will soon deal with the callous agenda of bile by the likes of Kwamena Ahwoi, who are desperately seeking control of the NDC party.

“The NDC could, should and has survived on the authority of the word but if care is not taken, it will collapse and drown as has been happening, on the word of those in authority,” Rawlings noted in his post.

It appears there is not going to be an end in sight of the broken relationship between Prof Ahwoi and his former boss, Mr Rawlings.
The NDC stalwart recounted how the once enviable relationship between him and the founder of the party broke down completely in his newly launched book.

Prof Ahwoi explained that Rawlings’ constant criticism of Atta Mills is the reason for their now frosty relationship.

He furthered that as someone who played a leading role in the initiation of Mills into the NDC, he was unhappy with Rawlings’ constant criticism of him.

Previous I’ve done my best, it’s your turn to rate me – Akufo-Addo to Ghanaians
Next Akufo-Addo unveils first assembled VW vehicles in Ghana