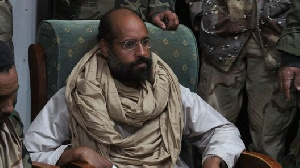 Saif Muammar Gaddafi, son of Libya’s former ruler overthrown in 2011, has announced- as the New York times says- his intention to re-enter politics.

The New York Times claimed its columnist Robert Worth interviewed Saif last May inside a closed complex in Zintan city, about 136 kilometers southwest of Tripoli.

The newspaper quoted Saif Gaddafi as saying: “I’ve been away from the Libyan people for ten years. You need to come back slowly, slowly like a striptease.”

The writer said that he sensed conspiratorial in the way Saif spoke. “He seemed to have felt that he could trust me, that I would be a willing partner in the seduction of his fellow Libyans,” the reporter explains.

Saif, who is still wanted by the International Criminal Court for crimes against humanity, told the western journalist that he is a free man and was organizing a political return.

In the lengthy interview, the 49-year-old said he spent the time during his absence from public life, watching the currents of Middle Eastern politics and quietly reorganizing his father’s political force, known as “The Green Movement.”

Despite being cautious about whether he is running for president, he believes that his movement can restore the “country’s lost unity.”

His campaign pitch is that “politicians have brought you nothing but misery. It is time for a return to the past.” the writer said, commenting that this kind of language is being used by many, including politicians in the USA.

“They raped the country — it’s on its knees… There’s no money, no security… There’s no life here. Go to the gas station — there’s no diesel.” the dictator’s son says.

When asked if he was still a prisoner, Saif said the rebels who arrested him a decade ago became disenchanted with the revolution and “eventually realized that he could be a powerful ally.”