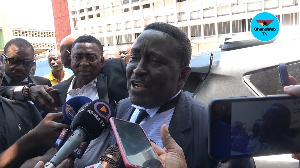 The lawyer for Aisha Huang, Nkrabeah Effah Dartey, has said the case of Aisha Huang has been overhyped by the media following her rearrest.

According to him, it was so much talked about that one would think the accused persons were standing trial for murder, a thing he sees as a problem.

He said he was however shocked when he came to court and noticed his client has been charged with two charges which were mining without license and sale of minerals without a license.

During hearing on Wednesday, September 14, 2022, the council of the accused person who was pleading for bail, said,

“I am sorry but I must say that the media has hyped this case far beyond proportions. You will think they are standing trial for murder. When I came to court this morning and saw the charge sheet, I was surprised, so these are the two small charges you have put against this two. Do you have the fact? “

Commenting on issues regarding bail denial for his client and 3 other accused persons, Lawyer Effah Dartey described the decision by the court as unfortunate.

According to him, the subject his client is being charged for is a minor one and not as critical as has been projected.

“In the light of that the decision to refuse bail, it gives credence to what is being said which is most unfortunate. My worry is that the media has overhyped this small matter of mining without license. it’s a small matter and happens every day and it that which is causing the problem,” he added.

Ms. Huang who is facing two charges of mining without a license and engaging in the sale and purchase of minerals without a valid license together with 3 other Chinese nationals, was remanded by the court on Monday, September 5, 2022.

The suspects were remanded as they had no legal representation during their first appearance while the court also failed to provide a Chinese interpreter for proceedings.

Appearing in court on Tuesday, September 14, 2022, lawyer Nkrabeah Effah Dartey who is the lead counsel for the accused persons prayed the court to grant his clients bail.

His request according to GhanaWeb’s court reporter, Nimatu Yakubu Atouyese was objected to by the prosecution.

According to the prosecution, new arrests have been made therefore granting the accused person bail may give them the opportunity to interfere with witnesses and investigations.

The prosecution while citing public interest in the matter also argued that Aisha Huang has a history of sneaking in and out of the country and is therefore a flight risk.