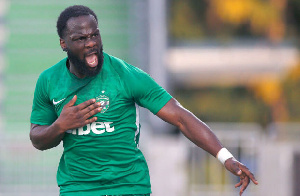 Dutch-born Ghanaian winger, Elvis Manu says that he is the solution to Ghana’s age-old problem of scoring goals.

Since the retirement(unofficial) of Asamoah Gyan from the team, goals have been very difficult to come by for the team.

According to Elvis Manu, he has the Midas touch to score goals for the Black Stars and he should be handed the opportunity to impress.

The 28-year-old winger was born in Dordrecht – Holland to Ghanaian parents and switch his nationality to Ghana but seven years after he still has yet to make his  Ghana debut.

Speaking to Angel TV, he revealed that Ghana has a good team but the main problem is goal scoring which he is the solution.

“Yes, I think that the squad is good, I won’t say anything bad about the squad but in the last couple of years, what everybody says is that they lack goal scoring players and that is a team I think I am the player to bring it into the team when given the opportunity,” he said.

Meanwhile, he has disclosed Ghana’s performance at the 2010 World Cup changed his mind to switch nationality and play for the Black Stars.

“At first, it wasn’t too much like people switching nationality, the first that I know was Quincy Owusu Abayie, so he was the one that gave me the eye-opener to play for Ghana. I also think all Africans fell in love with Ghana, especially how they played at the World Cup”

He played for Holland at the U-19, U-20 and U-21 before switching to Ghana where he is still waiting for his debut.

The journeyman has played for the likes of Brighton, Huddersfield, Feyenoord, Cambuur, Go Ahead Eagles, and some clubs in Turkey and now plays in Poland for Wisla Krakow.

Tags AM Ghana’s GOAL I PROBLEM scoring solution THE to