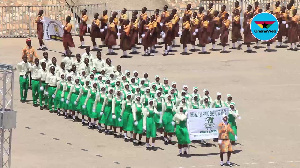 As has become the norm over the years, school children who attend Independence Day marches line-up at parade grounds along with members of the different law enforcement agencies.

Some of the students, who are left standing in the sun for the duration of the parade have often fainted some having to be rushed to nearby hospitals to receive treatment.

“I sincerely hope we have matured beyond lining kids in the sun to march in the name of Independence Day! Can we avoid abusing kids this 6th March please !!!” he posted on his Facebook wall.

This year’s 65th Independence Day anniversary will be held at the Cape Coast Sports stadium under the theme “Working Together, Bouncing Back Better.”

Previous VIDEO: Davido flies Chioma and son in private jet to London
Next Our Freedom Cannot Be Fully Utilized When Our Communities And Workplaces Are Unkempt – Yussif Salford (PMP)