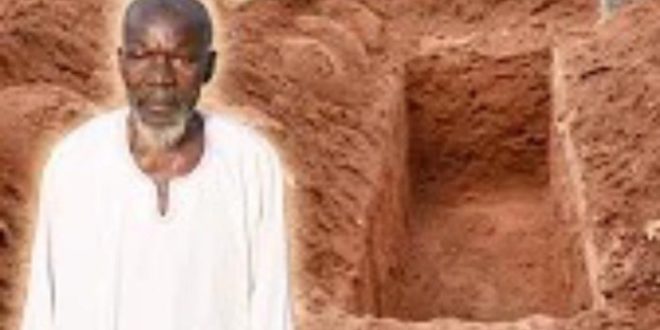 Interesting story of a man who witnessed his own ‘funeral’

It is a natural phenomenon to prepare ahead of celebrations; be it wedding, birthday, graduations etc, but one of the most important events of mankind, which is funeral is never planned for.

However, a Busia man is set to defy this status quo by making an elaborate preparation for his funeral in a small community in Kenya.

The 87-year-old Aloise Otieng’ Ng’ombe, who began the preparation with the purchase of a coffin worth Ksh58,000 (GHS 3,900), is now planning ahead, as he believes his day of death is approaching faster than ever.

In an interview with Afrimax TV, Aloise disclosed he has dug up his own grave, bought drinks and paid for all services ahead of his funeral.

In a latest development, he has hired professional mourners to wail at his funeral for hours non-stop.

He has also hired a soldier to throw him salutes, despite being a civilian.

All persons employed for his funeral rehearse at least twice a month and in Aloise’s opinion, partaking in his funeral preparation is equal to witnessing his own funeral.

For this, he says he is not scared of death or it’s aftermath, as he will be resting, knowing fully well his funeral will be orderly and the biggest recorded in his community.

According to the father-of-18, the whole concept is to preach on the need to love someone once alive than dead.

Tags A FUNERAL HIS interesting man OF OWN story WHO witnessed