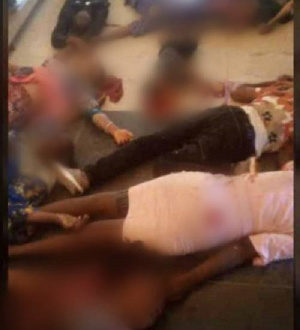 The Minister of Interior, Rauf Aregbesola disclosed this on Thursday while briefing State House Correspondents after the National Security Council meeting in Abuja.

Gunmen had on Sunday attacked the church located on Owa-Luwa Street in Owo, the hometown of the State Governor, Rotimi Akeredolu, leaving many parishioners dead and several others injured.

Aregbesola said that security agencies, particularly the police, had been directed to apprehend the terrorists.

The minister equally noted that the attack had no ethnic-religious connection as he asserted ISWAP activity was unrelated to any religious doctrines.

The minister stated that the council was also worried about killings in the name of blasphemy and had directed the security agencies to go after perpetrators of both incidents that occurred in Sokoto State and Abuja recently.

He added that enough security measures have been put in place ahead of the Ekiti State gubernatorial election taking place on June 18, 2022.

SaharaReporters had earlier reported that ISWAP claimed responsibility for an attack on Kabba as the terror group kept moving towards the Southern part of Nigeria.

The community is about 95 kilometres and less than two hours to Owo in Ondo State where over 50 worshippers were recently killed during an attack by gunmen on St Francis Catholic Church.

Several videos on social media had showed victims being killed and lying on the church floor in the pool of their own blood.

An eyewitness said that the terrorists were throwing “bombs and shooting” at the same time.

He said about 25 persons were taken to the hospital while about 50 people are feared dead.

According to him, when the gunmen stormed the church, they shot many people in the leg, and others at different parts of the body.