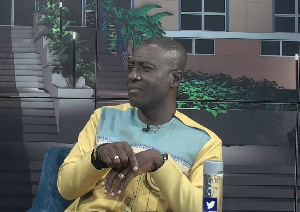 Adom-Otchere is an unseasoned braggart, unwise chameleon that attracts no colour – Captain Smart

Speaking on his morning show on Onua TV, monitored by GhanaWeb, Captain Smart said that he is particularly annoyed at Adom Otchere’s claim that he will sue the Controller and Accountant General if they do not make Togbe Afede XIV take the ex-gratia back.

He said that Adom Otchere’s threat to sue does not make sense because there are a lot of public officials who refused to take ex-gratia, including President Akufo-Addo and ex-Defence Minister Dr Kwame Addo-Kufuor; Adom Otchere will have to sue for all these people.

He added that members of the New Patriotic Party see Adom Otchere as a fool and are only using him for their benefit.

“Paul Adom Otchere is an unseasoned braggart and an unwise chameleon that attracts no colour. The NPP members see you as a fool and are only using you; you are the one they can use. We the so-called senior journalist in this country, if we don’t take care, because of politics, our knowledge will become useless.

“… I want you (Adom Otchere) to sue the Controller for Nana Addo refusing to take his salary… My uncle Dr Kwame Addo-Kufuor did not take any salary or ex-gratia when he was Board Chair of SSNIT, go and sue him. J.A. Kufuor, when he became minister, also asked the government to reduce his salary by half; go and sue him.

Naadu Mills refused to take the ex-gratia that was to be given to her husband, the late Prof Mills. Paul, I want you to sue the Controller and Accountant General for all these people who refused to take their benefits legally due them,” he said in Twi.

He added that the behaviour exhibited by the broadcast journalist against the Paramount Chief of the Asogli Traditional Area, Togbe Afede XIV, will not be exhibited against any Akan Chief.

Togbe Afede drew praises from Ghanaians after he rejected a GH¢365,392.67 Ex-gratia for his service in the Council of State on the grounds that payment was inappropriate for a short, effectively part-time work.

Adom Otchere attacked Togbe Afede for the gesture, saying that the Chief was being hypocritical and should return all the benefits he got as a Council of State member.