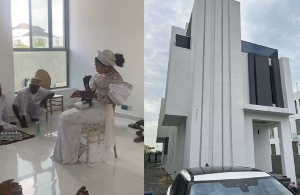 A video of Muslim clerics praying for Bobrisky at the celebration of his new house went viral.

In the video, Bobrisky was seen wearing a woman’s outfit with nail extensions as well as long lashes and make-up whiles seated with the clerics.

Speaking in an interview with Punch, Sheik Bello described the clergymen’s actions as ‘nonsense’.

According to him, Islam does not accepted people who call themselves transgender as it is against the religion.

“I don’t know what to call that – shall we say it is lack of the fear of Allah or lack of the knowledge of right and wrong? I don’t understand what will make an Islamic cleric to be hobnobbing with a man who is claiming to be a woman. No matter what he is doing, be it housewarming, birthday, or whatever celebrations, I don’t know what exactly those clerics intend to gain from such a gathering. Are they seeking fame? Is it for money? Would Bobrisky offer each of them a million naira? I doubt if he can give each of them a million naira.

What would we say took them there? It’s total nonsense. If we ask those clerics to give us references or authorities from the holy Quran to support their action, trust me, they won’t have anything to back up their action. So, Islam does not approve of such.

Yes, Islam doesn’t accept such; Islam totally prohibits a situation where a man dresses like a woman or a woman dresses like a man; neither does Islam accept transgender. The position of Islam on such issue is that whoever engages in such is regarded as a lunatic, who isn’t in his or her right senses. Islam is clear, it is a complete religion, Islam does not approve of it.

We (men) can’t turn ourselves to women. Will we be able to give birth to children as women do? Is it possible to insert a womb into men? Bobrisky would like to have us believe that he is a woman and he has breasts and buttocks, but are those real breasts and buttocks? Are they not products of surgeries? Can he conceive like a woman and give birth to babies? Islam totally prohibits such.

People who engage in such immoral acts will be punished here on earth and on the day of recompense. Allah, who created, us knew what He was doing when he created us as men and women. He doesn’t approve of such manipulation.”

The cleric added that; “All these things are tantamount to asking for the wrath of Allah. In every lecture I deliver now, I’ve always ensured to speak against men plaiting their hair. Hopefully if people change, maybe the country will know peace, otherwise, I can only pray that Allah wouldn’t unleash his wrath on upon us. The people of Sodom and Gomorrah did not do as much as what we are seeing today. I swear by Allah, they did not do as much as this before God destroyed them. We ought to think. What is more pathetic is that we have clerics in the country and no one seems to be concerned about this or condemning it. The media should question our clerics; we have been too silent. There is none of these things that sits well with the ways of Allah. He said in the Qur’an that He is capable of frightening us, such that we won’t have peace; He said he could send down hunger upon us; He said He could make us kill one another and while doing that, He would make famine hit us and all our farm produce would dry up such that nothing will come from the farms again. He instructed Prophet Muhammad (SAW) to tell his followers to take it easy and desist from wild goose chase.

What is someone from a Muslim home going to benefit from having tattoos? I don’t know what they are looking for. It’s sad and it is not right. We can only fervently pray to God and clerics, including pastors, should not keep quiet. If we all speak out in one voice perhaps we will get it right.”

A student of Moshood Abiola Polytechnic (MAPOLY), Abeokuta, Happiness Odeh, has been killed allegedly by …