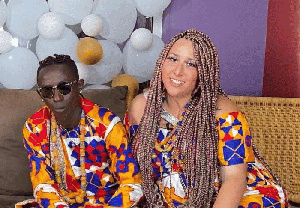 It was a difficult moment – Patapaa’s wife addresses sexual allegations

Liha Miller, the wife of Patapaa, has disclosed that it has not been rosy being the partner of the Ghanaian musician because, at the initial stage of their relationship, she was bombarded with insults and sexual allegations by some Ghanaians who barely knew her.

The German in an interview with Zionfelix monitored by GhanaWeb mentioned that from the very moment Patapaa shared a photograph they took together on social media, persons who knew nothing about her background started body-shaming her.

Aside from the insults thrown at her, there were comments that Patapaa was only seeking to exploit her, a reason the musician had opted to be her partner, she recalled.

“I remember I saw some comments on the Patapaa picture that he posed with me on his birthday and people were talking about me, about my family… Somehow, it has pained me. I was new to this,” Liha said.

To add salt to injury, she was hit with sexual allegations and that made the situation worse, she admitted in the interview. According to her, it was around the same period Patapaa had unveiled her as his girlfriend and having been insulted by a section of the public for no apparent reason, the last thing she expected was allegations of sexual misconduct.

“There was news going around that I have slept with Stonebwoy, Bisa Kdei, Patoranking and others which were not true. It was very hard. People were judging me without knowing me. I couldn’t even introduce myself to them. Patapaa had said ‘This is my girlfriend’ and everyone started talking. But after that, when people started to know me, they began to love me. But it took some time,” Liha noted.

Sounding elated, Liha who is now in Germany working as a nurse stated that she loves Ghana because it is a beautiful place.

Tags A ALLEGATION DIFFICULT IT moment Patapaa Sexual WAS WIFE