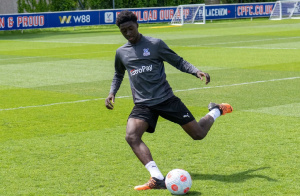 Teenage English-born Ghanaian winger Jeserun Rak-Sakyi has  recounted how he was let go by Chelsea after they West London club deemed him not good enough.

The 19 year old says that it was very difficult as all he knew was Chelsea and all of a sudden he had been rejected and needed to find himself a new club.

He says that he was with the blues at the tender age of eight till he was cut loose at sixteen.

“I was at Chelsea from the age of eight to 16,” Rak-Sakyi tells the Official Crystal Palace Podcast. “I wasn’t able to get a scholar there.

“Palace took me in. They had a plan for me and that was really good for me and my family to hear, that they would look after me and develop.”

Rak-Sakyi made his first start in the last game of the season for Crystal Palace having appeared as a substitute against Chelsea on the opening day of the season.

The youngster scored 19 goals for Crystal Palace at all age groups whiles providing 6 assists for his side in 29 matches.

Source: ghanaguardian.com
BY chelsea I IT Rak REALLY released Sakyi TOUGH WAS when 2022-05-24
Elvis Anokye
Share